A twiend of mine recommended that I do a blog on my nominations for Room 101. So after some intense whittling down of candidates here are my magic fifteen. (P.S. This is dedicated to Nicole) 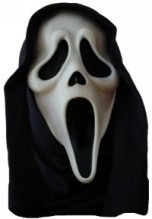 This might seem like a strange one but my first nomination for Room 101 comes in the form of the most chilling mask to ever exist. It’s a completely irrational fear of mine but it’s safe to say I am genuinely terrified of this mask. I’m so afraid in fact that there is a good chance come October 31st, I will refuse you any treat whatsoever if you don this haunting persona. I’m even quaking with fear at the thought of this daunting face appearing before me as I write this at 12:21am.

Shut up… Even Babs thinks Chris Moyles is a twat.

Again, this will probably seem an odd choice. I know that old Moylesy is quite popular on his hit Radio 1 breakfast show and I won’t begrudge him that. In fact, I find him most tolerable when his voice commands the airwaves. It’s only when my Leeds-supporting namesake makes the switch to television that his insufferable nature becomes apparent. Much like how a child might change around the popular kids. Moyles seems to fall under the disillusion that he’s the funniest man in existence every time he appears on the box and to make matters worse, his warm charm often apparent on the airwaves seems deeply contained by his revolting, four-chinned face.

3. People who open my fridge without asking

Closed… The way a fridge should be.

Honestly, what is this fuckery? You cannot just go in to someone’s home and open their fridge. It’s like going in to someone’s church to borrow their bible. I mean, by all means if I invite you to have a look in my fridge then go ahead. But if you feast your eyes on my stashes of Coca-Cola, Frubes and Galaxy chocolate without prior permission then God help you.

These people are simply hideous on the inside. Now, when I say Internet celebrities, I am talking about everything from your gossip-fuelled bitches like Perez Hilton to your vein, conceited wannabes like Olly Riley. Basically, these people are famous for smacking keyboards or being attractive. They are usually conceited and driven by their own putrid desire to be famous for nothing. Olly Riley and Nick Lowe are usually found regurgitating motivational quotes then responding with vitriol of the homophobic nature to their ‘haters’. Let’s be honest, internet celebrities serve only one purpose – to be hated. God bless, Olly Riley for making that so damn easy.

I shouldn’t even need to say anything . These people are the scum of the earth. You can often find them in the deep south of the States, usually sucking on the corners of a double-barrel shotgun.

Censored… Hull is a shithole, that’s why he came home.

Now, I’m not trying to say that people from Hull aren’t as smashing as the rest of the folk (Nottingham excluded) found in Great Britain. But unfortunately, their city is literally an urban skip, I mean how bad can a place be that it actually has a Twitter account dedicated to finding tweets insulting its appearance? I had the unfortunate chore of visiting the Humberside settlement last December and I felt as if I was visiting the rubble of Hiroshima on magic mushrooms. Hull is old-fashioned; not in the cool vintage way but in the practically Amish way. Obviously, every English city has it’s good parts and bad parts. It’s just that Hull’s good parts make Luton look like Rome.

These things are the second most evil animal to walk (fly) the face of this earth. Their creepy head rotation and frying pan stare is enough to send chills down anyone’s spine. Forget, bald eagles. The owl is the menace of the sky.

Here comes part deux of my internet snobbery; Nomination number eight is that of social-networking giant, Facebook. It’s fair to say, I was once a keen Facebooker, back in 2010 before it experienced a massive decline thanks to the rising popularity of the far superior, Twitter. However, Facebook is now synonymous with three things; chavs, wannabes and moaning teenagers. I’m not saying, Facebook doesn’t have it’s practicalities but let’s just say if I was given the choice now, I would not become a fan. In fact, I’d stick to the new social-networking site, I now ‘follow’.

I can’t even put a funny spin on this… It’s just so annoying. My ultimate gear-grinder.

Shit badge… We all know it’s the back of an old lady’s head and her shoulder blades.

22.1 miles due north of my beloved Leicester City, lurks a hideous disease under the guise of Nottingham Forest Football Club. If delusion had a physical state it would manifest itself as one of the vile trees, I am subjected to on Twitter. If you follow me, you are probably well aware that I don’t like Forest fans and Forest fans don’t like me. My reasoning is that my beloved gunslingers up the A46 are arrogance personified. Whoop-de-fucking-doo, you’ve had two years of success. Well, guess what, this one time I trended on Twitter, does that make me permanently famous? No, it doesn’t. The under-educated Shottingham inhabitants seem to have trouble grasping this concept but are more than happy to bring it up 24/7. In fact, if any of you have the misfortune of bumping in to the inbreds from Robin Hood-shire, sling a history book their way – It’s their favourite past-time.

Raspberries… Like strawberries except with absolutely no positives whatsoever.

The Hitler and Stalin of fruits. I’ve only ever had the experience of each of these two ‘fruits’ raping my taste buds once and I’m thrilled to say, I’ve never had to go back. I do genuinely struggle to find any redeeming factor from either of these two. The banana is a putrid yellow mess with an utterly revolting texture that should only ever be visible wearing pyjamas on children’s television. Whereas, raspberries are little pink grenades of poison that ignite a quite frankly violent gag reflex from me. Give me, vomit fruit over either of these any day of the week.

We are not amused… America takes credit for someone else’s work…again.

An annoyance of patriotic influence coming through now – The use of the American flag on a language selector when referring to English. I would first like  to take this opportunity to say that I have no intention of trashing our backwards Transatlantic cousins but the language is quite clearly property of old Blighty. It doesn’t even make sense for the flag of the United States to be used. Granted, there are more English speakers there but, it’s bloody called ENGLISH. You wouldn’t describe ‘Don’t Stop Believin” as a Glee song ahead of Journey just because it charted higher than the original would you? No is the correct answer.

Fame whore… Peter still doesn’t know what he wants to be when he grows up.

There’s overkill and then there’s Peter Andre. It’s probably fair to say, Peter Andre is for the most part, a  very popular man among the British public (particularly with those at ITV2). He’s had a highly-publicised marriage with airhead, Katie Price, as well as an at best mediocre pop career. However, Peter’s biggest flaw is his inability to know when to call it a day. Since 2008, Andre has had FIVE reality TV shows, all on ITV2 from ‘Going it Alone’ to ‘Here 2 Help’. I’m sorry, but who in their right mind would want to watch a 30-something has-been help  a random member of the public fix their boiler? Like, I said – Overkill would  be a massive understatement.

These creatures are runts with a capital ‘C’. These floppy, damp blobs of death screech evil in every way from their predatory nature to their icy, yellow stare. I’m all for animal rights. In fact, I have adopted several endangered wild animals but not these nasty bastards. They should make like a dodo and fuck off.

Vermin… Beliebers are the rats of the internet and Bieber fever is the bubonic plague.

Interestingly enough, the Random List Generator I used to order my 15 nominations left these turds until last and it was a mighty fine choice indeed. Next to the fans of Notts Forest, there is not a single more irritating group of individuals on the planet. It’s probably apparent to you that these (usually) pre-pubescent scumbags frequent to hijack Twitter trends on a daily basis, with the sole purpose of thrusting their odd obsession in to the faces of the masses. Unfortunately, these twerps seem unable to grasp the fact that their abrasiveness actually generates hate for the thoroughly likable person they claim to ‘idolise’, when he has done little wrong. Also, many of them think Justin Bieber is on the same level as the great King of Pop, Michael Jackson despite Biebs current total of 0 number-one singles…