The Claridge Shin ‘Scenes of the Season’ Award

We’re going to kick off (pun intended) this year’s set of awards with a bit of controversy. Whilst the joyous and vociferous celebrations after Leonardo Ulloa and Nathan Dyer scored their crucial late winners against Norwich and Aston Villa, this year’s award is going to an off-the-pitch moment. The 2016 recipient is Hazard’s goal against Spurs. How could it possibly be anything else? Chisits across the globe piled in to bars and pubs to watch Spurs go toe-to-toe with the incumbent champions. After a sparkling first half from Tottenham, things looked bleak, and Chelsea look bruised…both physically and mentally. But Gary Cahill pulled one back and Eden Hazard, Leicester legend found the equaliser with a one hit wonder to make Owl City blush, sparking the wildest celebrations Leicester has ever seen.

The Dennis Wise ‘Twunt of the Year’ Award

So many contenders, well, there always are. This year’s winner is so deserving of this spack-olade, Jon Moss. Mr. Moss, has two choices; accept that he knows nothing about football or that he’s an attention-seeking foghead desperate for a part in Jamie Vardy’s Hollywood biopic. Of course, if he was actually given that choice it would be the wrong one. Apparently, winning the ball in a slide tackle and tangling legs with a defender merits a red card but grievous bodily harm on four counts doesn’t if you’re wearing a West Ham shirt. I will still never forgive this dumpy attention seeking moron for sending Schmeichel off at Nottingham Forest for throwing the ball back to the centre circle. Perhaps Jon Moss should take up a new career at Gringotts bank, he certainly looks the part.

The Yann Kermorgant ‘Stupid Decision of the Year’ Award

HOOOOOOOF…. Huth fires the ball in to Row Z… of the West Stand

I was going to give this award to Riyad Mahrez, for deciding to take and miss yet another penalty away at Aston Villa, which ended up costing us two points. But, then I remembered that that’s ridiculously harsh and I owe our resident Algerian some reparations for not voting for him in the actual End of Season awards. So instead, this year’s winner is letting Robert Huth take *that* free-kick. I love Robert Huth, he’s a frighteningly good centre-back who could part a tidal wave by his sheer presence but taking set pieces clearly aren’t his strong suit. In fact, the shot was so bad, it was probably closer to a Stoke corner than a Leicester goal-kick. Either way, it was good for a laugh – same old Leicester, taking the piss.

This justification is somewhat of an open love letter to my favourite player, so here it goes; N’Golo Kanté is a phenomenon. No, not a phenomenal footballer, just a phenomenon. Describing him as a footballer would imply that he’s human when he clear isn’t. Golo is clearly a sentient god-like being sent to planet Earth as some sort of reward for inventing the beautiful game. There is nothing this guy cannot do. He flies from box-to-box in minute one and minute ninety three, extending his Stretch Armstrong legs to win the ball every…single…time. If you don’t love him for his alien sporting abilities alone like how cute/cool he is in the gif above. Genius.

One King in Leicester…

Romantic moment of the season? I should just choose the whole sodding thing. The entire story, sub-plots included is like a literary masterpiece. A squad of rejects bound by a brotherly bond, representing a self-deprecating club that has underachieved for 130 years, in comes a man with the same history of underachievement. In a climate of uncertainty, the nearly man and the nearly club combine and this band of brothers win the league at odds of 5000/1, led by three players who were lower league nobodies just months before. What a season and story it’s been. Wes Morgan lifting that trophy was a sight I’ll never forget but the real romance was portrayed by a latter holder of the famous trophy. Seeing Andy King lift that trophy was special. He is a man who has stuck with this club at it’s lowest ebb, for his entire career and has been rewarded for his fierce loyalty in the most glorious way, in an era of football where players are so fickle. To cap it off, it was fitting to see King score on Leicester’s historic coronation, a true Filbert Way great getting his just desserts.

The Claudio Ranieri ‘Claudiism’ of the Year Award

Ranieri is a such a charismatic man. His forays in to the media’s all pervasive glare couldn’t be more different from his predecessor’s. Whilst Nigel Pearson was more adept at measured snarling, King Claudio is much more jovial, so much so that his Dilly Ding Dilly Dong outburst will long live in the memory of Leicester City folklore. It has taken on a life of it’s own, a popular slogan, a disgustingly catchy chant. Claudio has become every fan’s surrogate grandfather, a man you just cannot dislike no matter what, with a charisma so stringent he can melt the most sour-faced Foxes fan like butter. Thank you for blessing our club with your footballing prowess and charming humour, we owe you a pizza.

The Paul Gallagher ‘We Forgot That You Were Here’ Award 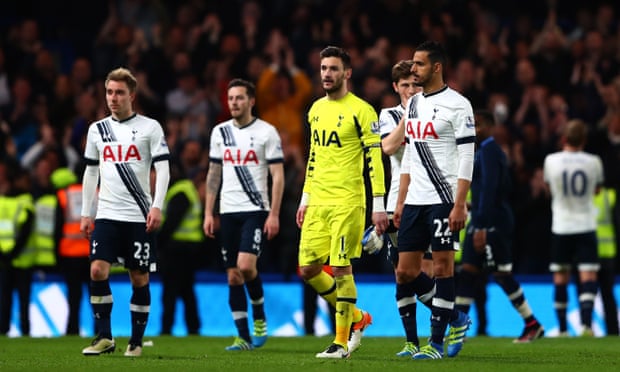 How’s the head, Tottenham Hotspur? I know crying relentlessly can be really dehydrating. So… when exactly are you coming for us? We have one game left this season and we’re ten points clear. In fact, since you started singing that, we’ve pulled further away from you. So,  are you coming to get us after you write us off as ‘nobodies’? Are you coming after your fan groups make a video on YouTube so arrogantly explaining why you’ll win the league on goal difference, despite being so far behind? Or are you coming after your entire outfield side gets suspended for kicking seven bells out of Chelsea in a futile attempt to keep your title hopes alive? By the way, are we the same ‘nobodies’ that have spent eleven times as many days top of the Premier League this season than Spurs have in their history? There’s no doubt that Spurs had a great season, they’ve been a truly exhilarating side to watch, but you didn’t finish 1st in the most important statistical ranking -so thanks for the tacit competition, you made it interesting for a few weeks but we are the champions, and your 2015/16 season will be a forgotten footnote in football history.