The Liberal Democrats hit the skids in the 2014 European elections as four parties polled ahead of them including victors, UKIP. Nigel Farage’s “people’s army” (frightening bombast I know) topped the polls with 4.35m votes and 24 MEPs, a whopping increase of 11 seats. Labour scored 20 MEPS whilst the Conservatives elected 19, finishing third in the popular vote for the first time in their 180-year history. Both the Green party and the Scottish Nationals captured more MEPs than the Liberal Democrats, who lost eleven of their twelve seats.

The main story of the European elections in Britain was the charge up the polls by UKIP. The success of the pestiferous purple clan can be attributed to  two things; UKIP’s forthrightness in approaching the subject of immigration and their ability to make sure their candidates and in particular, their leader come across as down-to-earth rather than as the political elite he actually is. Despite the BBC’s protestations, UKIP has not caused an earthquake in British politics. Whilst, it is a remarkable if not irresponsible achievement for a party outside the ‘big three’ to win an election, it’s worth noting only 29% of the 33% of people that bothered to vote voted UKIP, accounting for just 9% of the UK’s electorate. Given how staunch ‘Kippers’ are in their support of UKIP’s ‘imbecillic trailblazer and that solitary view they have, it’s safe to say that the majority of ‘Kippers’ voted. In fact, the powers that be in Westminster have alienated much of the public and driven them in to the arms of ale-swilling fox, Nige (you still have no MPs by the way).

Helping hand… The right-wing media fed the electorate a diet of fear and xenophobia.

Unsurprisingly to anyone who doesn’t turn a blind eye to UKIP’s plethora of scandals; there are several falsities surrounding their campaign. Ones that have done nothing to harm their vote share in these elections. On last Thursday’s Question Time, UKIP were questioned about their reliance on anti-EU and anti-immigration propaganda and the reasons to why they don’t focus on any other policies. Simply, they wouldn’t have won if they did. Unfortunately for the rest of us, Nigel Farage is an adept yet duplicitous man. Do you think people would vote for UKIP if it was common knowledge that they oppose equal gender rights, they campaign for reintroduction of hand guns and would allow the ivory trade to continue? Well, let’s hope they won’t seeing as the rest of UKIP’s views are likely to get a greater airing now this European business is put to bed. UKIP’s anti-establishment disposition is also not all it appears to be, in fact one of the party’s MEPs is better known by his title; the 10th Earl of Dartmouth. And Nigel Farage is hardly the average Joe he claims to be either. He was pictured modestly addressing his subjects from the golden staircase of the Ritz for his birthday just a couple of months ago.

Adversely, it was a horror show for the Liberal Democrats. Whilst, it was predicted that the yellow party would suffer in this election, losing all but one MEP and falling behind the Green party as well as Lab-Con and UKIP was a monumental blow. The media of course have been declaring that the Lib Dems have flatlined and are heading for extinction, but that is not the case. David Dimbleby even claimed that the Lib Dems only held on to their one MEP by 16 votes rather than by the actual 7,000. There will always be a market for liberalism in British politics. Despite their reputation for moderation and fence-sitting, the Lib Dems were staunch in their support of the EU leading in to the election, assuming a rather extreme view – declaring themselves the “party of IN”. Despite the party taking a hammering, having their vote share halved, Britain actually voted more in favour of pro-EU parties than the Eurosceptics, surely demonstrating that the Lib Dems’ message isn’t the problem but the messenger himself. Time is surely up for Nick Clegg, who has led the Lib Dems from an opinion poll rating above Labour’s in 2010 to one below the Green party just four years later. In actuality, the Liberal Democrats have always been fairly popular on a policy basis but as Lynne Featherstone touched upon on BBC News, the Liberal Democrats and particularly Nick Clegg have disillusioned far too many voters, and irreparably so. 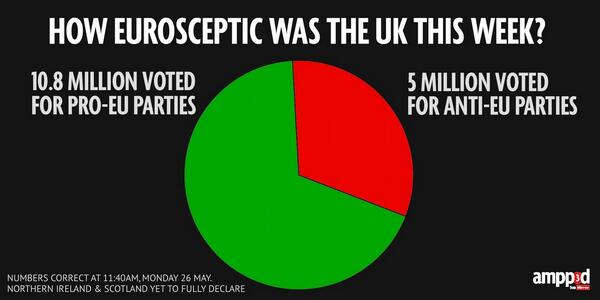 There were very few positives that came from Thursday’s election. But at the very least, the contemptible British National Party are seemingly on their way out, having had their share cut drastically. However, it’s not as good as it seems as UKIP have effectively monopolised the jingoistic vote. UKIP are still not on course to win a single seat at next year’s elections but these results may give Britain and other nation’s greater bargaining power in renegotiating terms of membership in the EU – something I’m definitely not opposed to (and nor are the Liberal Democrats for that matter). 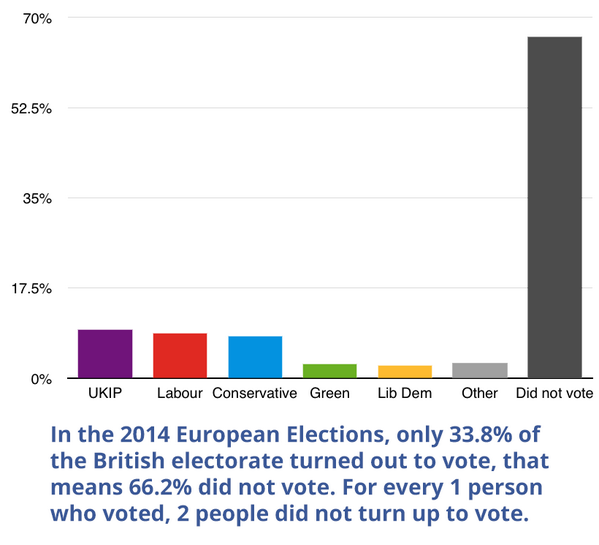 Unfortunately, there are plenty of negatives to take from these elections too. For instance, people like Roger Helmer will continue to represent my constituency in the European parliament, as an anti-foreign, anti-gay, anti-female politician. It’s almost unthinkable that he has been elected by a landslide in 2014. The electorate have replaced some of the hardest working MEPs in the Liberal Democrats, Labour and the Conservatives with the indolent UKIP, a party whose representatives regularly don’t even turn up. Actually, it seems only right to congratulate UKIP and their millions of voters for surrendering control of our affairs in Europe to a party who deems the very process to be pointless. Overall, the right-wing media and their corresponding parties have changed the climate of the European parliament. The bombastically charged temper of fear has swept control of Europe in all too familiar fashion and mostly because “voting isn’t important”.