Leicester City grabbed a point from the defiant claws of Yeovil Town on Tuesday night in a pulsating final five minutes at the King Power Stadium. However, a romantic tale of Leicester’s adored keeper Kasper Schmeichel rightly claiming his first and probably last league goal was quashed hours later as the Football League swung it’s unjust hammer of incontestability. 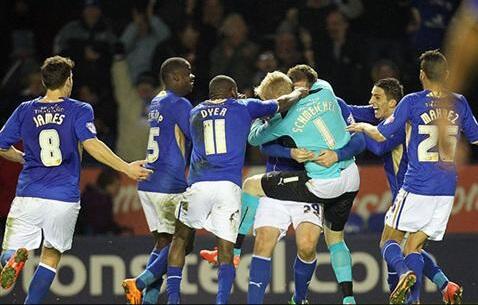 In truth, it was a thoroughly frustrating night for the Foxes and their 26,000 strong home support. City had been undone by a perfectly executed game plan by the Glovers. Unsurprisingly, Yeovil came and parked the bus, looked to spoil the league leaders’ game and hopefully escape with a point. Town’s 300 travelling fans (not a bad turnout by the way) couldn’t believe their luck when they snatched the lead from a set piece. The goal came against the run of play and there was a shared feeling that Leicester’s unusually tired side could not pass their way back to three points. In truth, Leicester had had much of the game despite Yeovil’s successful curbing tactics. However, the Foxes were unable to force one of their thirty-one attempts across the line until the 92nd minute, when two came along at once. Danny Drinkwater fashioned a super cross in to the box that the out of position Schmeichel thumped with his head to force it against the crossbar and over the line. As the Danish international wheeled away in celebration, substitute Chris Wood bundled the ball in to the net to ensure the goal stood as the home crowd went ballistic for the late drama. Everyone was seemingly confused with both players thinking they had scored and the stadium announcer rewarding Wood and then Schmeichel with the goal.

If you follow me on Twitter, you’ll know how I personally feel about Schmeichel but even disregarding that, it seems simply irrefutable that the late goal was his. Video and photo evidence is conclusive in its verdict that the goalkeeper’s bullet header was at least a foot over the line. Whilst Chris Wood’s indispensable contribution was needed in order for the officials to award City with the goal, the Football League and referee should have reached a unanimous decision that in hindsight, Schmeichel had already scored the equaliser before Wood’s ‘goal’. However, The Football League reached the exact opposite conclusion to the amazement of the Foxes faithful.

After consultation with the match officials, we can confirm @OfficialFOXES' equalising goal last night has been awarded to Chris Wood #LCFC

While many Leicester fans, myself included, are disappointed and annoyed at the governing body’s ruling many are apathetic and maybe rightly so that the goal was given to Chris Wood instead of Kasper Schmeichel, as Schmeichel himself tweeted ” At the end of the day, as long as we got the goal. All that matters.” in response to the verdict. However, the ruling does beg the question; what is the point in retrospective panels if they maintain their incorrect decisions even when presented with irrefutable evidence to the contrary? Surely these reviewing committees were founded in the view to correct mistakes made in the game, namely the Dubious Goals Panel which was not officially consulted as it is only available in the Premier League much like goal-line technology.

I posed this question to both the Football League and the FA. The latter unsurprisingly has not replied but the Football League stated that “based on information submitted to The Football League from this fixture, all parties (the club and match official) were in agreement that the goal be awarded to Chris Wood.” It is likely that the referee is merely sticking to his guns to avoid a surefire punishment for his team’s ineptitude. The club’s agreement to concur with their decision is too unsurprising given the backlash they may receive for contesting an official’s verdict. Regardless, Assistant Manager Craig Shakespeare reiterated that the club were not bothered by who was credit and were more concerned with the astonishing character of the squad once again coming through when it mattered. Outside the training ground the debate still rages on with some Leicester fans launching a campaign for the decision to be overturned with as many as 98% voted that the goal should be awarded to Schmeichel in one poll.

Maybe it doesn’t matter who scored. Maybe it doesn’t matter that the romance of football has fallen victim to Andy Madeley and his assistant’s inability to admit they got it wrong. Maybe it doesn’t matter that the Football League’s retrospective committees are nothing but a sham. In principle, I will do everything I can, which granted isn’t a lot, to ensure the goal goes to the right man and hopefully rectify yet more shortcomings from England’s impenetrable footballing institution. But in reality, regardless of the outcome, the dedicated hoards who stayed with Leicester until the final whistle on Tuesday night will long remember the night that Schmeichel saved our skin, this time at the other end of the pitch.

Disclaimer: There is very little factual truth in this piece. Almost none in fact.

November 13th 1929 – Fred Waldron Phelps is born – his index finger is longer than his ring finger.

February 23rd 1946 – Fred has his first homosexual experience with an attractive young man from down the street.

February 24th 1946 – Fred spends most of the day doodling the attractive man’s name on the back of a Liberace poster.

May 3rd 1952 – Fred has a conversation with the first woman he’s met since his mother. He marries her immediately, confirming his heterosexuality.

September 16th 1953 – Fred reads the Bible and highlights the bits he likes.

Smoking is bad for you… Fred and his friends.

November 20th 1976 – Fred decides to give his family ‘the talk’ about the ‘birds and the bees’. An awkward conversation ensues, in which only back-door entry is on Fred’s agenda

November 25th 1977 – Fred’s daughter, Shirley gives birth out of wedlock, but beats God at a game of Chase the Ace to avoid condemnation to Hell.

December 15th 2002 – Fred delves in to the forest in search of unicorn blood to ensure he lives forever. He fails.

December 17th 2002 – On his way home, he bumps in to the attractive young man from his teenage years. Fred makes himself look presentable in the bathroom but the attractive man has left. Fred snaps a Ricky Martin CD in half and feels better.

November 9th 2007 – Fred attends the premiere of Wrong Turn 2, in which daughter Shirley plays one of the cannibals.

February 17th 2014 – Fred is banished from the Westboro Baptist Church after being caught twerking to Glee’s cover of Madonna’s ‘Vogue’.

March 20th 2014 – Fred suffers a heart attack after accidentally watching an episode of Modern Family. He is surrounded by posters of WWE’s Batista.